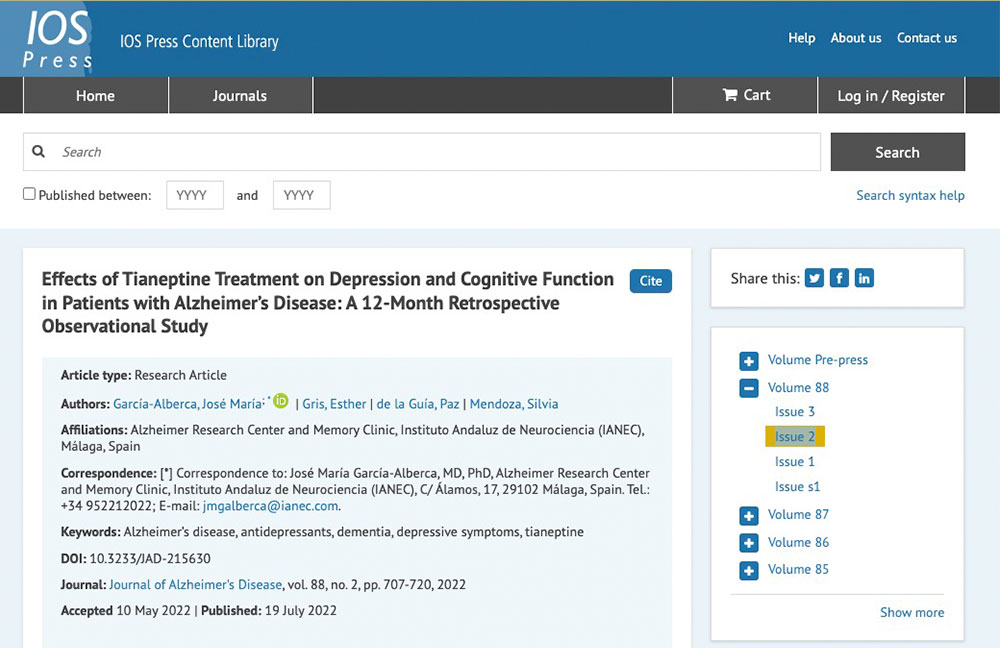 Effects of tianeptine treatment on depression and cognitive function in patients with Alzheimer’s disease: a 12-month retrospective observational study.

The results of a study carried out at the IANEC showing the cognitive benefits that can be achieved in patients with Alzheimer’s disease who receive antidepressant treatment with tianeptine have just been published in the Journal of Alzheimer’s Disease.

The aim of the present study was to explore the effectiveness of the antidepressant tineptine compared with current antidepressant treatments on depression and cognitive functions in AD patients in a real-life setting. To this end, we carried out a retrospective analysis of service provision data over a 12-month period from the Instituto Andaluz de Neurociencia (IANEC) in a sample of people suffering from AD.

We retrospectively identified 126 AD patients who had received antidepressant treatment for 12 months with tianeptine or other antidepressants. Subjects were divided into two groups according to the treatment they had received: tianeptine group (n = 38) or other antidepressant group (n = 88). Drug effects on depression, cognition, behavior, and functional performance were evaluated at baseline, 6, and 12 months.AMixed Effects Model Analysiswas carried out to evaluate changes in performance scores.

Both tianeptine and other antidepressants showed an antidepressant effect after 12 months with significant improvement on the Cornell Scale for Depression in Dementia, the Hamilton Depression Rating Scale, and the Neuropsychiatric Inventory-Depression subscale.Astatistically significant improvement at 12 monthswas shown in the tianeptine group versus the other antidepressants group on most of the cognitive measures such as the Mini-Mental State Examination, the Letter and Category Fluency Test, the Rey Auditory Verbal Learning Test, and the Boston Naming Test.

Only patients who took tianeptine showed benefits on cognition and depressive symptoms in patients suffering from AD. These positive effects probably provide additional benefits by targeting different pathophysiological mechanisms compared to other antidepressants. In this study tianeptine presented very promising results in AD patients with mood disorders and provides evidence that many patients will benefit from antidepressants that include, though not exclusively, a glutamate-based mode of action. This study should inspire the design of future long-term randomized controlled trials that contribute to supporting the use of tianeptine for improving cognitive function in AD patients. In addition, this study could aid clinicians in the treatment of AD, benefit the patients concerned and provide reliable references for broad application.